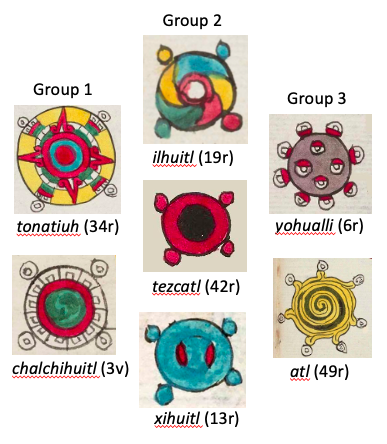 Circles have a special meaning and place in Native American cultures. Circular representations of the sun seem to echo the round ball in the sky, and pointed rays could be accommodated in iconography, too. (See the tonatiuh glyph in Group 1). But, not all of the objects represented in the glyphs of Groups 1 and 2 are round in their naturally occurring state. Mirrors, for instance, whether made from mica, pyrites, or obsidian, were apparently cut into circles. Obsidian often had to be polished. Stone workers seemingly made beads and other round shapes out of jade, by cutting, carving, and polishing them, too. When it came to turquoise, artisans likely found turquoise more readily available in small pieces that were suitable for mosaic, and then they created circular mosaics among other shapes. Perhaps these mosaics echoed the round shapes of water-filled, blue and/or green puddles and ponds, even accounting for their wavy or choppy surfaces.

Taking a look at the glossed meanings given to the glyphs in Groups 1 and 2, one finds that they are all objects that have an inherent ability to shine or shimmer: the sun (tonatiuh), an obsidian or mica mirror (tezcatl), and the precious stones of turquoise (xihuitl), and local jade (chalchihuitl). Light can reflect off of all of them. According to Nicholson and Berger, Fernando Alvarado Tezozomoc spoke of "un espejo relumbrante" ("a brilliant mirror") on a figure of Huitzilopochtli that occupied a shrine at the Templo Mayor in 1487. Could all these objects be described as brilliant or shimmery? Is there an iconography that would uphold this possibility?

The small exterior circles on the sun and the jade stone with the interior, concentric circles inside them, are reminiscent of the droplets that, together with the turbinate shells, splash off currents of water. (See the atl glyph in Group 3, for example.) Some scholas see these small concentric circles coming off of streams or bodies of water as chalchihuitl (jade, or jade beads). If they are taken as beads, probably polished to a shine much like the discs that were worn by people and figures representing divine forces, then perhaps they suggest a shimmer, too--shine upon shine. Eduard Seler ["Mexican Picture Writing," p. 150] saw these four small circles as "eyes at the four corners, that is, sending out rays [of light] in four directions." They were "precious stones...lustrous bodies."

The intentional repeating pattern of four small circles on the perimeter of the larger circles is surely significant. The number four is symmetrical, and symmetry was important to the Nahuas. James Lockhart's study of forms of expression explores this propensity for even numbers such as four and eight. [See The Nahuas, 1992, 396.]

The particular locations selected in the placement of the four external smaller circles on the glyphs in Groups 1 and 2 is surely not a coincidence, but intentional once again. They are located in such a way as to almost provide "corners" (as Seler also noticed) to the circles they were on, being on the upper left and right and the lower left and right, forming a quatrefoil. If a line were drawn between each opposing pair of smaller circles, the result would be an X. In all cases, the glyphs have a center circle, too, which, when added to the quatrefoil, forms a quincunx. The Nahua quincunx has a relationship with the earth's cardinal points, including the sun's rising and setting locations, plus a vertical axis that links the sun's nighttime resting place in the underworld with and its midday zenith in the celestial realm.

The tonatiuh glyph (in Group 1) expresses some of these ways of conceptualizing the universe. The fact that the tonatiuh glyph is a double teotl glyph underlines the connection to sacred or divine forces. The hieroglyph for ilhuitl (day) is also clearly linked with the sun and the calendars, the day and year counts (tonalpohualli and xiuhpohualli).

The pinwheel aspect of the ilhuitl color scheme gives it a feeling of movement. Does a shine or shimmer emanate from these glyphs, connect them to the sun, and therefore the Nahua universe, with all of its philosophical and religious significance? The concept of "shimmer" is a light that includes movement; does movement (olin) enter into the iconography? The association between the sun and divine or sacred forces may lend itself to these other precious stones.

The coloring of these possibly shimmering objects varies considerably, along with their iconographic details. The red ring is something we are watching, however, given its placement in many glyphs as a liner or passage zone between inner and outer spaces. The chalchihuitl glyph, with the red ring right next to the green, three-dimensional jade bead, is somewhat reminiscent of the red and/or yellow liner that separates the earth from the waterway in the apantli, for example. In a similar vein, the red ring around the obsidian in the mirror may provide a kind of liner akin to the red/yellow liner around the opening of a cave, separating the underworld with the earth's surface, as in this (oztotl) glyph. See also our article about interiors on the navigation bar to the left on the front page of this digital collection. The red leaf-shaped details of the turquoise glyph are something of an outlier iconographically, but perhaps they served as some kind of passageway or a nod to the mosaic work that turquoise sometimes required.

Two more images appearing here (the bottom two) point to 1) the previously mentioned shimmer of water--in this case, from the yellow water (atl) glyph of Acozpan (49r)--and, 2) the representation of the night sky as round and full of stars (what some scholars call "starry eyes"). The stars here clearly associated with eyes (perhaps looking down upon us from the celestial realm). These eyes appear around the perimeter of the circle, but also within it, and there are many more than four, perhaps recognizing the uncountability of the celestial bodies. While not quite in line with the other quatrefoil or quincunx shimmery shapes, perhaps the tlacuilos are nevertheless indicating that stars, like eyes, are shiny or shimmery. (Draft, SW.)