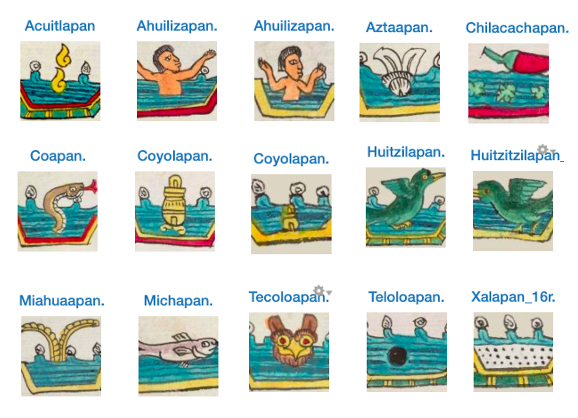 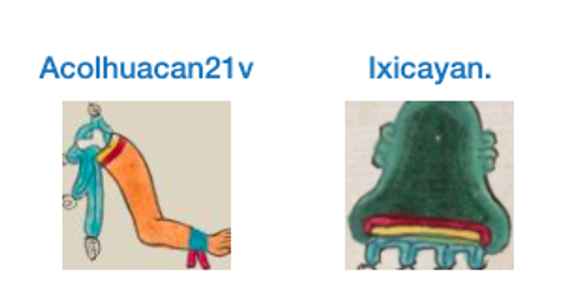 Some Aztec hieroglyphs appear to work as containers when combined with other glyphs. The glyph for apan(tli), a water channel, canal, or container with water, is one of these. The word for water [a(tl)], an important feature of a landscape, often comes at the start of a place name, and the locative suffix -pan (which translates on or in), comes at the end. So, both the a- and -pan of apantli can have an efficient function in a place name, as shown in the first four of the place name glyphs in the image on the left.

That said, Frances Karttunen is not convinced that apantli "can be treated as separable," because pantli does not mean canal by itself. She reminds us that the glyph of an apantli does not necessarily literally refer to a canal, but can refer to a place being on the water. Compound glyphs for Atenco (27r), Atlan (18r, 53r), and Atlatlauhcan (07v and 25r) all include visuals of the apantli, but not the phonetic "apan" in the place name, but just water in those cases. [From an unpublished manuscript by Karttunen, "Critique of Glyph Catalogue in Berdan and Anawalt Edition of Codex Mendoza."]

The locative suffix -apan ("on the water") of apantli—a phonetic indicator in this case—can also appear at the end of the place name. Michapan could be a place noted for fish in or on the nearby body of water. Teloloapan shows a rubber (olli) ball in the middle of the water. Incidentally, rubber also appears contained in free-flowing water in the glyph for Olac. One wonders whether there were rubber trees growing on a river or, seemingly more likely, the stem of olli provides an "ol" sound, a phonetic element, rather than intending a meaning relating rubber or movement. With others examples, such as the bells in the glyph for Coyolapan, it might be questioned whether the bells are literally meant to be perceived as being in the water or on the water. Such examples remind us that many elements of place names are not necessarily to be taken literally, but are providing a phonetic dimension.

Our growing collection of apantli glyphs allows us, incidentally but interestingly, to examine some of the details in the glyph's representation. The water (atl) component is quite consistent in having horizontal lines of varying thickness, often wavy and washed with a turquoise blue, with splashes at the top spewing turbinate shells and water droplets—or perhaps chalchihuitl (precious green stones that symbolized water). An exception is the case of Atlatlauhcan, where the water is red, with the color red being contained in the water.

Considerable variation occurs in the apantli glyph in terms of the enclosures that surround the water on three sides (bottom, left, and right). If the term apantli referred to a canal or irrigation ditch (combining the "a" of "water" with the "pantli" of "furrow"), what we see in this glyph may be a cross-section view of the canal. If it is a cross-section of a vessel, the shape with the walls leaning outward is reminiscent of many of the containers that delivered small tribute items, such as chiles or achiote.

Moving to take a closer look at the walls and bottom of the water container in apantli, we see, for example, an outer rim of green with double yellow hashmarks running perpendicular to the green stripe. Inside that green rim, typically, there is a yellow stripe that comes in more direct contact with the water. Sometimes this yellow stripe does not have the outer green one, but just appears on its own. At other times, the yellow stripe has a red one running parallel to it. This red one can be on the outside perimeter of the water container (as we see in the glyph for Ahuilizapan and the one for Coyolapan) or on the inside, next to the water (as we see in the glyph for Acuitlapan and Coapan). Seemingly intending to emphasize the color red, in one case red is the only color used for containing the water, as in the glyph for Chilacachapan.

The choice of colors and the use of these lines to contain water were very carefully chosen. When we look at the edge of a torn shoulder, where the bone is exposed and water emerges, as in Acolhuacan, we can see the red and yellow lines separating the arm from the liquid in a way similar to what we see in apantli. The same red and yellow lines also occur at the bottom of the glyph for tepetl (hill, mountain). And, in the glyph for Ixicayan, water leaks from those two red and yellow horizontal lines at the bottom of the tepetl. This access to the interior—or site of effluence—may prove to be very important when considering how tepetl can stand for pueblo or altepetl, which is a compounding of atl + tepetl.

Gordon Whittaker offers a modification to the concept of a "container" glyph. As he reminds us, some elements are actually "superimposed" on top of a hieroglyph. The tepetl glyph, for example, will often have other elements superimposed over the center of the bell-shaped hill. At other times, elements sit on top of the hill or mountain. Considerations of the possible containment and superimposition of elements in compound glyphs can be important for those interested in creating compound glyphs in an authentic way.