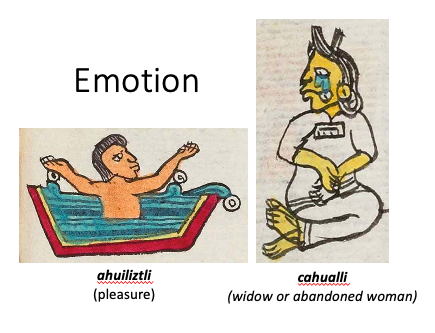 Like all humans, Aztecs felt emotion, just as their descendants, the Nahuas, do today. But an essay from 2016 by L. Sebastian Purcell has stirred discussion around the theme of happiness or goodness (neltiliztli) from the Aztec point of view. James Maffie has also addressed Aztec emotion in an essay he published in the Internet Encyclopedia of Philosophy, exploring teotl and teyolia.

More recently, a user of the Visual Lexicon asked to see glyphs that would convey: "honesty, hope, faith, courage, integrity, willingness, humility, brotherly love (or love for mankind), justice, perseverance, spirituality, and service." This inquiry spawned a watch for visual expressions of emotion (at minimum), and hence the launch of this short blog. So far, the vast majority of glyphs in this database are compound hieroglyphs and refer to place names, finished with a locative suffix. Second in number are personal names. Relatively few glyphs convey the particular language about which the user had inquired. The Online Nahuatl Dictionary is a more productive place to seek out such vocabulary. The personal name Tlaocol suggests sadness, as in the Matrícula de Huexotzinco, where the man with this name has tears running down his face in lieu of an independent glyph.

There are additional hieroglyphs that convey emotion, such as joy and pleasure or sadness and grief. The glyph for pleasure, ahuiliztli, has a man standing in water, with his arms raised up, as though he is rejoicing from the pleasure of being in the water. Joy can be tied to recreation, of course, and "recreation" is one of the translations that Frances Karttunen gives to ahuiliztli in her dictionary. The glyph for widow or an abandoned woman, cahualli, provides an example of the other side of the coin, a woman's face with tears. This brings to mind the tlaocolli (sadness) evidenced in the glyph for the personal name Tlaocol in the Matrícula de Huexotzinco.

The glyph for liver (or sny internal organ), el(li) and its compounds—such as teltapach—can also relate to emotion, even strong or negative emotions. This is reminiscent of European traditions of sayings such as "gut feeling" or "it turns my stomach," or feeling "liverish" (melancholy). Such comparisons remind us that cultural specificities that connect feelings to corporality can also coincide with human universals.

A further glyph, representing a quarrel, cocolli, which would involve strong emotions, is not imbedded in the human body. Rather, it appears to be a dark, swirling cloud of dust, which might have been raised by a scuffle. Note the nature of this online cartoonish representation of a scuffle. But the idea of a stirring of dust may also have religious connotations, whether associated with Mixcoatl (the Cloud Serpent) or with Teuhcatl, a deity related to Mixcoatl and translated by some as Dust Person.