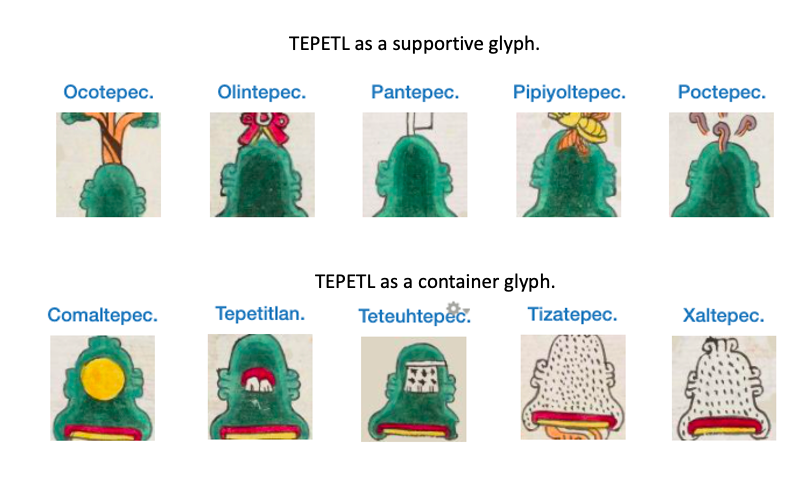 Tepe(tl), the glyph that represents a hill or mountain is, like water, another extremely common landscape feature in place names. It is not a coincidence that the Nahuatl term that was translated as "pueblo" in Spanish, was altepe(tl), which combines atl (water) and tepetl (hill or mountain). Mountains often had natural springs that supported life in so many ways (for drinking, bathing, washing clothes, and irrigating plants). Mountains chosen for habitation also had the advantage of offering a defensive position. The Mixtecs believed that clouds came from mountain tops, and clouds brought life-sustaining rain. What is more, mountain peaks very often hold a sacred meaning, surely not unrelated to these life-giving qualities.

Typically, the sign for tepetl will form part of the place name by taking its place at the end of the name, in the form of an attached locative suffix, resulting in -tepec, "at the hill." Many times a second sign will sit atop a tepetl sign serving as the key element of the place name. In the Nahuatl language, when a compound word has two parts, the first part modifies the second. Thus, with Ocotepec, the result is Torch Pine Hill or Torch Pine Mountain. In the image on the left, in the top row, we see this torch pine tree on top of the hill, plus other examples with a flag, a bee, smoke curls, and a calendrical symbol for movement. Significantly, the glyph for tepetl, the green bell-shaped sign with the red and yellow horizontal lines at the mountain's base and the rocky outcroppings on the sides (and sometimes the top), is quite stable.

The second sign in a compound place name can also be contained, crucially, within the tepetl sign or, as Gordon Whittaker would say, it can be superimposed on top of it. The bottom row in the image on the left shows how elements can be displayed within or superimposed upon the tepetl glyph. One can also see how an element, such as grains of chalk (as in Tizatepec) or sand (as in Xaltepec), can completely fill the tepetl shape, demonstrating even more clearly how it can be a container.

The example of Tepetitlan shows how the term tepetl can form the start of a place name, in this case, explaining that the community in question is next to the hill or mountain. But tepetl can also be a silent locative, not playing a phonetic role in the place name, whether at the beginning or the end. Perhaps it was well known, in such cases, that these towns were on or near a mountain. Perhaps in some cases the silent tepetl stood for altepetl (pueblo), as we see in the example of, Cempohuallan or Chiconquiauhco. There are many additional examples of the silent tepetl in our collection of glyphs as place names in this database, as shown here.

As European mapping traditions penetrated Indigenous cartography, we often see a Christian church taking the place of the altepetl symbol. See, for example, the San Agustín Cuevas (Tlalpan) pictorial manuscript that we have in our Mapas Project digital collection.