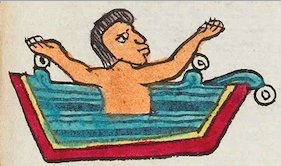 In this digital collection, we have begun introducing examples of "iconography" from codex pages where the example does not qualify as a hieroglyph, but where it can be helpful for making comparisons and informing our analysis of glyphs. That said, glyphs themselves have an iconography that is important to recognize, for instance as a means of understanding a glyph's embedded meaning and why the tlacuilo painted it the way it appears.

For example, glyphs for water [a(tl)] often have streams splashing off the main flow, and the tips of these splashes have turbinate shells and droplets, usually in an alternating pattern, one after the other. Some scholars interpret the droplets as jade [chalchihuitl) beads, given the iconographic similarity between drops and beads, with their smaller, concentric circles. Water and jade can also share a green color and a translucence. In the hieroglyphs from the Codex Mendoza, at the heart of this collection, the preeminent color of choice for water, however, is a turquoise blue. The hieroglyph for turquoise (xihuitl) has this same blue.

The apan(tli) (canal or irrigation ditch) is a regularly recurring glyph in place name. It has distinctive iconographic features, too, starting with (typically) a trapezoidal shape. It is open at the top and has a lining that runs from one side, down across the bottom, and up the other side, containing the water (with its usual characteristics and color, although with some exceptions). The canal lining will vary somewhat in how many layers it has, but the full features include a layered effect with red and yellow liners and an outer wall of green with pairs of yellow hash marks. The green and yellow might suggest some kind of construction, distinguishing a purpose-built canal from a ditch with water. We have yet to understand the full meaning of these graphic elements, but we do also see the red and yellow lines at the bottom of the tepe(tl) (where a natural spring can emerge from the mountain), adding another differentiation between the earth and the water within or on it. For further explorations on the red and yellow colors used as a separation between exteriors and interiors, see the article on the left navigation bar on the front page of this digital collection.

Bodies of water, such as the apantli, can have undulating black lines, both thick and thin. These lines suggest the motion of waves or currents, and sometimes the lines swirl, reminiscent of eddies, or turn at angles. Angular turns of water in place names are somewhat rare in the Codex Mendoza, but swirling waters are fairly common. Other examples with these swirling waters are Azteccan and Anenecuilco.

The apan(tli) could be seen as a compound glyph in itself, being perhaps the equivalent of a pan(tli), furrow, full of water [a(tl)]. Thus, it is a glyph within a glyph. Beyond this, the apan(tli) has the capacity (and possible intentional function) to contain other hieroglyphs. See, for example, Ahuilizapan (top, left), where the man's body is half immersed in the water, his arms raised perhaps from the pleasure of being there. Another way to see the apantli is as a glyph upon which other glyphs can be superimposed, perhaps because, like the tepe(tl), it has an area in the middle that has room for a superimposition that is space-saving. Still, with the tepetl, objects that are not superimposed over the bell-shape of the hill will frequently be placed at its peak. Perhaps such placement at the top is meant to draw attention to the peaks, given the frequency with which pueblos with nearby peaks often have a strong oral tradition or lore that involves this sacred geography. See, for example, the work of Alan and Pamela Sandstrom in Northern Veracruz (Pilgrimage to Broken Mountain, 2022) and his contribution to Mother Worship (1982).

The tepe(tl), hill or mountain, also has its standardized iconography. Its rocky outcroppings, usually on each side but sometimes at the top, actually take a shape reminiscent of the curling edges of the te(tl) (stone, rock), which probably provides the phonetic clue that tepe(tl) begins with the sound "te." The word tepe(tl) possibly grew out of the word for te(tl), adding something meaningful to it, with the "pe." The rocky outcroppings on the slopes of hills and mountains are often the location of caves, and thus we find those same iconographic curls on the exteriors of caves, and caves, when shown in profile, can appear like mountains lying on their sides.

Thus, as with the apantli glyph, in the tepetl glyph we see again how iconography can be shared across different glyphs. Sometimes, too, a glyph serves as a niche for containing another glyph. See the hill with rocky outcroppings that contains the rain and hosts a number on top in the place name glyph, Chiconquiauhco (left). (Draft, SW.)