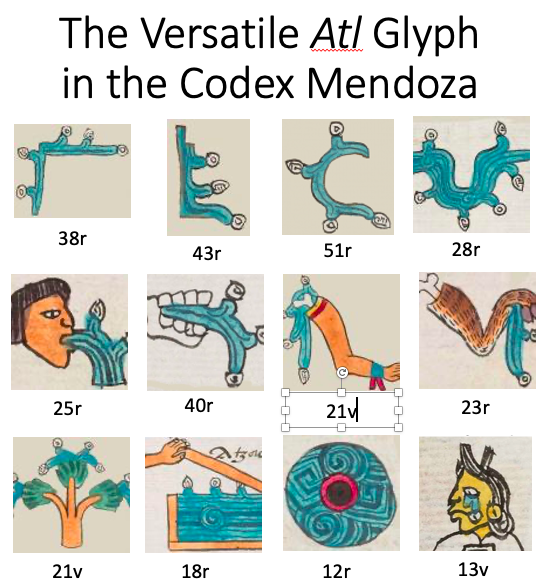 The tlacuiloque (writers, painters) who created Aztec hieroglyphs in the Codex Mendoza showed great flexibility in representing the glyph for water [a(tl)]. An exceedingly abundant component of compound glyphs, attesting to its presence in the landscape, water is represented as flowing, pouring, spilling, being contained, leaking, dripping, and more. We present a few examples in the images on the left, but one can also search the word "water" in the Quick Search window or click on the "Water" theme in the cultural content drop-down list from the Advanced Search page to see the vast array of water signs.

In the top row on the left, we see how water could easily wrap around other shapes. In making our atomic glyphs, those additional elements have been cut away. The first, from folio 38r, was running across the top and down the back wall of a building [cal(li)] in the place name Apancalecan. In the second, from folio 43 recto, water flows inside a wooden corner in the place name Cuauhxomolco. The example from folio 51 recto had the water curving around a face in the place name Atenco. Finally, where we see the curve from folio 28 recto, this is not flowing around another object that forms part of the glyph, but is meant to convey a river with an exaggerated bend in it, captured by the place name Acocolco.

In the second or middle row of images on the left, in the example from folio 25 recto, water flows into a man's mouth. One might have expected that the man was spewing the water from his mouth, but the place name the glyph represents, Atl Huelic, refers to delicious water, which the man is apparently drinking. Here, the direction of the objects splashing off the water help indicate the direction of the flow (upwards). From folio 40 recto, in contrast, the water flows out of the mouth of a skull in the place name Cualac (meaning, ironically, At the Place of Good Water). The third example in the middle row water emerges from the point of a shoulder [acol(li)] at the top of the arm in the place name Acolhuacan, from folio 21 verso. That water can emerge from the appendage of a deer becomes apparent in the example from folio 23 recto, in the glyph that represents the town Atl Icholoyan, Water's Jumping-Off Place, where the deer leg supplies the verb choloa, to jump, behind the possessed jumping place.

In the final row of images on the left, the versatility of visual representations of water (atl), or the sound "a" that it represents, continues to find expression. The ahuatl tree from folio 21 verso, on the left, has water springing from the tree's foliage. This phonetic element is a clue that this is not just any tree (cuahuitl), but a tree whose name starts with a. This tree is a detail from the place name for Ahuatepec. It is not an indication that this is a tree that literally squirts water, although it is conceivable that the tree drips sap.

The next glyph, moving from left to right, shows a box of water with a lid being closed by a hand. This glyph stands for the place name Atzacan, which is clarified by the term atzacqui, "that which closes off or stops the flow of water."

The third glyph from the left, in the bottom row, represents the place name Atezcahuacan from folio 12 recto. The root for this name is atezcatl, a shallow pool of water, a puddle, or the surface of a pool of water. The way the water is represented in this pool, with currents swirling in multiple directions, is dramatic. In the middle of the water is a mirror (tezcatl), which may have readers wondering if a mirror pond is meant, but it is more likely a phonetic indicator that clarifies that this is not just a large body of water (huei atl), but an atezcatl, in particular.

The final glyph shared here shows a widow or forsaken woman (cahualli) with tears running down her cheek. These tears (a water sign) clarify that this is not just any woman (cihuatl), but a woman left through abandonment, possibly by the death of her husband. This is the simplex glyph for the place name Cahuallan. (SW)