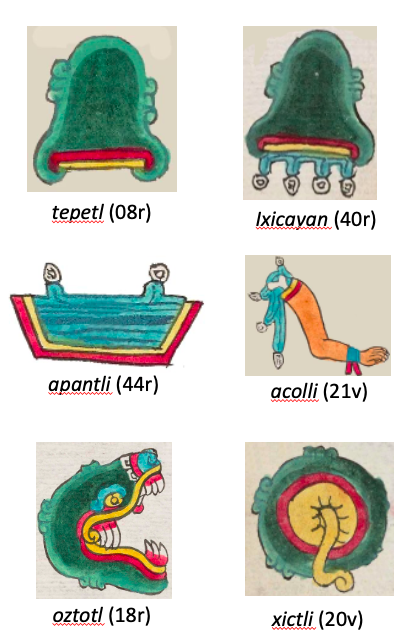 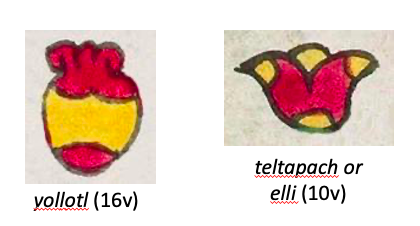 In the Codex Mendoza, the hieroglyph for hill or mountain [tepe(tl)] typically has a bell shape, colored with two tones of green. At the bottom of the bell shape appear two horizontal lines, yellow and red. The meaning and color choices are currently under investigation, but they appear to suggest an entry point to the interior of the mountain and a point of emergence from the underworld and thus a passage point.

These same colors are sometimes used to line the water channel or canal [apan(tli)]. These lines might be meant to separate the earth from the water. They also line the opening of the Earth Monster's mouth, which doubles as the entrance to a cave [ozto(tl)], or once again, an access point to an earthly interior (or underworld). The earth monster's head also has the curly edges linked to the iconography of stone [te(tl)]. Even the umbilical or navel [xic(tli), right] has the curly rocky outcroppings, providing another link between human insides and earthly ones.

Nahua tlacuilos also represented roots of plants in a special way in their glyphs and in iconography, in general. Roots are shown as though above ground, but they are typically painted red, perhaps because they were normally underground, seeking nourishment and water. One can find red roots on flowers, maize plants, agave plants, cacti, and innumerable trees. Trees can also have bloody interiors, as seen on the tree of Tamoanchan in the Codex Telleriano-Rememsis, folio 19 recto, which is broken in the middle of its trunk. The severed edges have a red line and a yellow scalloped edte. From this yellow region, red blood spurts out, with green droplets (or jade beads) at its tips.

Red and yellow color choices echo in the access points to the interior of the human body, which we can find, for instance, in the umbilical/navel hieroglyph [xic(tli)] and in the hieroglyphs of at least two shoulders [acol(li)] where the arm has been cut and there is a protruding bone. Molly Bassett (personal communication, October 2022) directed me to look at the dismembered Coyolxauhqui carved in stone, which is now imagined as it might have been in its original polychrone. There, the severed body parts have red and yellows linings along the jagged, severed edges.

Water emerges from the top of the arm at the site of the shoulder in one case of the glyphs of the Codex Mendoza. The same can be seen in one of the Tetzcoco glyphs. Some acolli have no color at the top by the protruding bone, and some have only a yellow edge. But when water emerges from the shoulder both the red and yellow lines are there. Thus, the red and yellow colors may have not only indicated access to interiors, whether of the earth or the human body, but also places where emergence from interiors could take place, such as when humans emerged from caves to live off the land or babies were born from their mothers' bodies. The bell shape of the tepetl and the oztotl (on its side) has been associated with the human womb. Book 6 of the Florentine Codex quotes women as saying that "in us is a cave, a gorge." {See Alan R. Sandstrom's contribution to In the Maw of the Earth Monster (2005), 35.]

Treasured liquids associated with life—such as water and blood—may come into play in accessing both earthly and human interiors. Philip Arnold ("Paper Ties to Land," History of Religions, 35:1, 1995), 37–38) interprets water to have been the Nahua equivalent of blood of the earth. In the glyph for Chapultepec in the Aubin Codex (fol. 19), water emerges from the red and yellow horizontal lines at the base of the hill. Another compound hieroglyph that supports the red and yellow lines of the tepetl as an access point for earthly waters is Ixicayan, a leaky place. In this visual, water drips from the red and yellow lines at the base of the tepetl, something like blood from a cut in a human body, or menstrual fluids from a woman's labia.

Blood, of course, was very important in Aztec culture. Book 10 of the Florentine Codex includes the phrase, "tonenca in eztli," translated by Anderson and Dibble as "our life [is] blood," as can be found in our dictionary entry for eztli. Obviously, interiors of bodies provided access to blood, and mountains were associated with life-giving spring water.

Another measure of support for red and yellow human interiors are the internal organs of the human body, such as the heart [yollo(tl)] and the liver [el(li) or, for example, teltapach, eltapach, or elli], which were also painted red and yellow. When viewing a surgical operation, one can see that fats can be yellow and tissue and organs can be red, which may explain the choice of colors for these passages from and toward interiors.

Looking ahead, it may be worth tracking animal interiors for this red and yellow combination. Snakes tongues, which are normally inside the mouth, even though glyph artists usually show them protruding, can be just red (as is the case of the serpent in the Codex Mendoza from folios 5 verso, 7 verso, 32 recto, 34 recto, and 50 recto), or they can be red closest to the mouth and yellow at the bifurcated extremities. For the latter, see our entries for coatl from the Codex Mendoza from folios 17 verso, 20 verso, and 23 recto. (Draft, SW.)